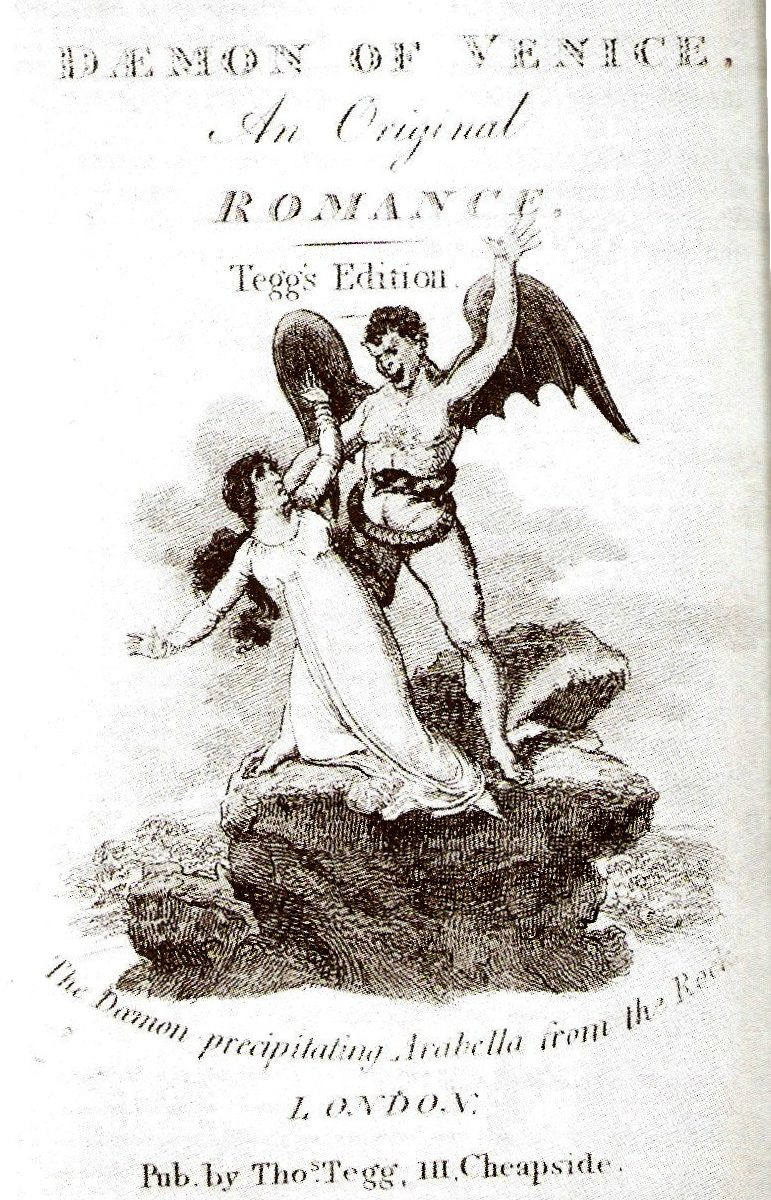 One of my favorite things about Broadview Press’s 2006 edition of Zofloya (1806), by Charlotte Dacre, is the inclusion of a chapbook version of the original text in the appendix.[i] Dacre’s novel, which occupies 216 pages in this edition, has been condensed into a 19-page document that speeds through the tale, sidestepping scenes of excessive emotion, dialogue, and prolonged action and cutting right to the barebones plot. A scene early on in the novel, in which the main character’s father is mortally wounded by his wife’s lover, the count, reads:
“Draw, monster, devil, and incendiary!” exclaimed the frantic husband, at the same time snatching his stiletto from his bosom.
“I have no sword,” cooly returned the count; “but I have, like yourself, a stiletto, that shall be at your service.”
The Marchese heard no more: he struck and struck again with desperate fury at the body of his antagonist; but his aim was rendered unsure by his thirst for vengeance, by the raging and uncontrouled passions of his soul. The count, calm, and self-collected, parried with hellish dexterity his indiscriminate attempts; but receiving, at length, the point of his adversary’s stiletto in his shoulder, he suffered an impulse of rage to nerve his hand; and, retreating for an instant, then furiously advanced, and plunged his dagger to the hilt in the breast of the unfortunate Loredani. (50)
In the chapbook, this same scene simply reads:
“Draw monster and defend yourself!” exclaimed the husband, snatching his stiletto from his bosom.
“I have no sword,” said the Count; “but I have a stiletto.” The Marchese struck at him with great fury. The indignant Count plunged his dagger into the breast of the unfortunate Leonardo. (280)
It sounds almost like an outline or as if recorded from memory. The chapbook, called The Demon of Venice: An Original Romance, By a Lady (1810), like most chapbooks, has been blatantly plagiarized from Dacre’s original, though Adriana Craciun speculates in her footnote to the Broadview introduction that there is a slim chance that Dacre could actually be the author (31). Regardless, the “borrowing” of plot details as the norm does not seem to bother either reader or author, and Alison Milbank claims that changing the names avoids any direct legal ramification for the often-anonymous authors.[ii] Milbank explains the difference between chapbooks and blue books (named, of course, for their blue covers): chapbooks are prominent in the seventeenth and eighteenth centuries and had begun to die out in the early nineteenth century, whereas blue books—Gothic in nature and featuring a more sophisticated illustration style—were prevalent in the early nineteenth century and dealt closely with booksellers (perhaps even those carrying the original novels upon which they were based). Though I have only seen reference to The Demon of Venice as a chapbook, I suspect that it qualifies more as a blue book for these reasons. While books and even library membership were expensive, blue books “provided racy, entertaining and cheap reading for the literate poor,” and like many other more accessible forms of entertainment, such as theater, helped to perpetuate and continue the Gothic legacy among both the well-educated upper classes and the lower classes hoping occupy their minds for relatively cheap (Milbank). Milbank describes two lengths of these small books or pamphlets: “sixpence for 36 pages, and a shilling for 72 pages,” though some were even shorter.
I am just beginning to enter the world of chapbooks and blue books, hoping that this may offer insight into many Gothic novels that have not survived through to modern publishing and digitalization. Even Ann Radcliffe’s monstrous tome The Mysteries of Udolpho has been squeezed into under a hundred pages and re-titled as The Veiled Picture. I’m also interested in these types of abbreviations and how they change the stories themselves as well as the reading experience. I like to think of them as similar to today’s comic books or the series of Great Illustrated Classics with which many of us grew up (the ones with a picture on every other page. You know the ones!). They provide a different type of access to great stories. As Milbank points out, even our most revered literary figures, such as Percy Shelley, had a fondness for blue books, particularly in his youth.
Finding these texts today, however, is not easy. One of my goals for this

post is to share with you a recent discovery that’s trying to make such texts as they were intended: accessible again. Literary Mushrooms, a spinoff project of Zittaw Press, is in the process of reprinting and re-illustrating fifteen Gothic chapbooks. They have just set up a great project page here, in order to gather funding for this project, which supports the 50’s-style comic illustrations, printing, and hand-stitching costs. Both Zittaw and Literary Mushrooms are dedicated in revitalizing an interest in these forgotten texts and to combine both nineteenth and twentieth-century elements to create a new (truly Gothic?) reading experience. I’ve just ordered a slew of copies of The Bloody Hand for the Gothic Reading Group that I run, distributing cheap thrills to the (poor) grad student masses, and we are anxious, amidst our regular studies of lengthy volumes, to discuss the difference in shifting from plot-driven novels to plot-only chapbooks, full (I might add) of exclamation points!

2 Replies to “Getting to the Good Parts: Chapbooks and Blue Books”