We’ve all seen them.

Animated gif images, image macros, and memes on academic writing. You know the ones, like this:

“When a friend asks how the dissertation is going”

Or, similarly,
“When someone asks you how the diss is going”

There are even those created for inspiration, such as the “Shouldn’t You Be Writing?” meme. 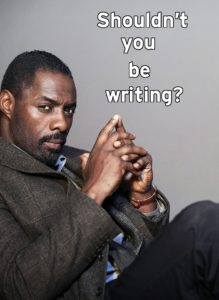 Whether we admit it or not,

Even something as simple as finalizing a topic for this blog post, trying to decide on something that would benefit this community, was an enormous task. While I knew I wanted to discuss writing, that’s still a very broad topic. Should I write on the differences between writing to be read silently, such as for a journal article, or aloud, like a conference paper? What about whether we should include digital writing (ex. tweets, blog posts) on our curricula vitae? Tips on learning to write new genres like proposal abstracts and statements of philosophy? Is it okay to tweet about conference presentations? What about my own lessons in writing from that initial graduate course on “Writing for Publication,” to the various workshops I’ve attended and organized on writing for publication? How about the costs of writing perfectionism? Soon I realized that all of these topics share a common theme: struggling with the writing process itself.
Writing about the writing process also meant I could throw a mini gif party with all these writing related image macros and animated gifs I’ve been accumulating on Pinterest. Because let’s face it, these little animated gifs convey a strong, multimodal rhetorical message.  Scholars who study the linguistics of internet language have argued that emotigifs, hashtags, “Tumblr speak,” doge speak, etc. are all powerful language tools that help us communicate in more complex and nuanced ways than simple text or emoticons can. In the case of the academic writing genre of emotigifs, they express – in a highly creative and immediate way – that academic writing requires wrangling thought and idea into words on a screen (or page, if you prefer) that, with a great deal of work, combine into a persuasive and engaging argument. As Kerry Ann Rockquemore wrote in her article “Writing and Procrastination,” “The truth is that the road from the spark of a new idea to the submission of an article, grant proposal, or book manuscript is a long and winding path.
We get distracted
“The sort of progress I make on my paper when I read Buzzfeed instead”

but then need to go back to the drawing board.
And those (hopefully rare) occasions when we worry about

But despite all the frustration depicted above, it’s not all bad. In fact, there are some days when we just want to cry out

And remember “that thing you’re writing is awesome.” Tom Hiddleston said so.