Like Arden, I, too, have been burning with curiosity about the recent critical reactions to several Frankenstein adaptations. But rather than valiantly sacrifice my time to the gods of Hollywood mediocrity as she so nobly does in her last post, I managed to escape the sub-par recreation of I, Frankenstein and instead turned my intrigue towards a much more mainstream and accepted performance: Danny Boyle’s 2011 National Theatre stage production of Frankenstein, featuring the incomparable Jonny Lee Miller and Benedict Cumberbatch.

As an avid fan of both Sherlock Holmes actors—Miller in CBS’s Elementary and Cumberbatch as the BBC’s Sherlock—I first heard about the National Theatre play and its “NT Live” film broadcasts in fall 2013. Lamenting the fact that I had already missed the boat on the live theatrical performance run in 2011, I searched far and wide for online bootlegged recordings, but to no avail. The production team had ensured that no DVD or video copy be made available, ever, aside from the original NT Live recording that aired in 2011 and in select “encore” broadcasts that have returned since by viewer demand. I quickly became one of those demanding viewers: on my way to Australia for winter break last year, I came close to sidetracking my layover in Los Angeles, as my timing just happened to fall on the one night it was playing at UCLA—that was how desperate I was to see this show!
As luck would have it, when scholars on the NASSR listserv began hotly debating I, Frankenstein last month, I was reminded of my own hot pursuit of Boyle’s adaptation the year before, and fortuitously discovered that during the week of Halloween this year, NT would again be offering its blessed performance to hungry viewers. I purchased my tickets immediately, of course.
The unique spin that this particular production has put on Mary Shelley’s tale involves Miller and Cumberbatch switching roles on alternating nights of the stage production, thus literally blurring the boundaries between Victor Frankenstein and his Creature. In Boston, the only version of the show that aired this year portrayed Cumberbatch as the Creature. In the NT Live screening, a few minutes of preliminary behind-the-scenes interviews show the two actors reflecting upon this blurring, suggesting that their physical portrayals had begun to embody the same twitches and mannerisms when playing both characters, thus extending the figurative “doubling” that we see in Shelley’s novel into a materialized indeterminacy.

Nick Dear’s screenplay and Danny Boyle’s direction took critics by storm in 2011. The Guardian described the show as “brilliant”: “a humane, intelligent retelling of the original story in which much of the focus is on the plight of the obsessive scientist’s sad creation, who becomes his alter ego and his nemesis…

The Independent likewise celebrated Boyle’s “extraordinarily haunting production” for its keen role-reversal approach, which “makes deep thematic sense because it highlights the irony whereby the son becomes the father, the slave the master, and a three-year-old creature ends up understanding more about love and the soul than the wannabe Prometheus who sparked him into being.” Even the Huffington Post raved,

“…in Nick Dear’s hands, the much-overlooked Creature finally finds his own voice…”

The play opens upon a stark, minimalist stage.

Empty except for a deep blood-red lighting scheme and a series of star-like chandeliers hanging from the ceiling, the setting is eerily akin to the insides of a beating human heart–or perhaps a more alien setting like the surface of Mars.

For the first fifteen minutes or so, all we have is the Creature. Born naked, sprung from a womb-like chrysalis chamber, he strains and struggles to gain mastership over his own limbs, flopping helplessly like an infant yet defiantly like a man, raging against the ground to emerge victorious, eventually, into a tentative but erect stance. Cumberbatch’s angst, combined with his stuttering convulsive movements, evoke the intensity of the creature’s unwieldy position in life, born into a world he no more understands than desires. In the NT Live opening interviews, Cumberbatch informs us that he had taken his method-acting approach seriously, and would study patients who had been paralyzed or had otherwise lost temporary use of their limbs during the course of their physical therapy sessions, as they tried to get, literally, back on their feet. The resulting effect is entrancing.

The raison-d’être of this initial attachment to the Creature, however, is that our allegiances remain always with him; we feel his struggle as he

encounters both the beauties of nature—a wildly shocking bird song, a radiant sunrise, the wonders of rain and snow—and the harsh industrial city.
Importantly, as a result, Victor Frankenstein remains practically nonexistent for the first half of the performance. As Ben Brantley’s review in the New York Times notes, the problem with this is that we don’t really care. From the moment of the play’s opening, our hearts and minds are linked with the Creature—a perceptive and intentional choice, of course, for a production that focuses on the discarded Satan/forgotten Adam figure that is the monster. Yet this choice also alters our understanding of Shelley’s story and of the scientist who finds himself in a similar struggle against social constraints, as does his Creature. The scientist in this production, Brantley remarks, is a rather flattened character, one whose richness we never encounter:

In the NT Live broadcast, however, director Boyle emphasizes his desire to give back the voice that has been robbed from the Creature in all other renditions—to let, in other words, both Adam and Satan speak; God’s voice doesn’t much matter. The ubiquity of Paradise Lost quotations, vocalized from the increasingly eloquent mouth of the Creature, and even a Blakean drawing projected onto the De Lacey household, signal the overarching message of the Creature’s profoundly Romantic performance:

“I should be Adam. God was proud of Adam. But Satan’s the one I sympathize with. For I was cast out, like Satan, though I did no wrong. And when I see others content, I feel the bile rise in my throat, and it tastes like Satan’s bile.”

for love and companionship, the two drives that propel the Creature towards understanding humanity and towards his pursuit of Victor. His frustration results not only from his abandonment by the father/creator, but from Victor’s refusal to allow him the same satisfaction of having a life partner.

Victor: What do you know of the power of love? … Millions of you on the earth? Coupling, procreating? No! You are the only one of your species – and that is how you will stay!  . . .

Creature: I am lonely! Every creature has a mate. Every bird in the sky! Even you are to be married! Why am I denied the comforts you allow yourself? A moment ago you were amazed at my intellect, but now you harden your heart. Please, do not be inconsistent, I find it infuriating! All I ask is the possibility of love.

This compelling thematic engagement with the pursuit of love, however, has some side effects. For one, it reduces the complicated family dynamics of Shelley’s novel, not only in terms of Frankenstein’s own family but also in the relationships between Victor and his creature (which at times resembles brothers more than sons and fathers) as well as the intimacies forged between Victor and Walton, the original recipient of Victor’s and the Creature’s interweaved narratives. Furthermore, in Boyle’s De Lacey family we find not a brother and sister in Felix and Agatha but a husband and wife—and a pregnant one at that. The threat of the Creature and his reproductive capacities (and Mary Shelley’s own mothering anxieties) is thus reiterated in Agatha, but also in Victor’s dismantling of the beautiful, naked female monster that he promises to the Creature. Later, the threat of the Creature’s potential procreation is made viscerally explicit when he violently rapes Victor’s bride Elizabeth, rather than just killing her for revenge. Progeny and reproduction seem to overcast the other potential thematics of the novel—but, then again, no show could do adequate justice to the rich multiplicities of Mary Shelley’s text.
One final observation: Cumberbatch’s Creature learns from the kindly De Lacey how to speak, how to read, how to approach the world, how to feel, and even how to love. This secondary father-son dynamic reinstates, of course, the absent Victor-Creature relationship that never manifests, until the end of the play when they pursue one another into a maniacal wasteland of the Arctic, tethered together until their ultimate deaths off stage. 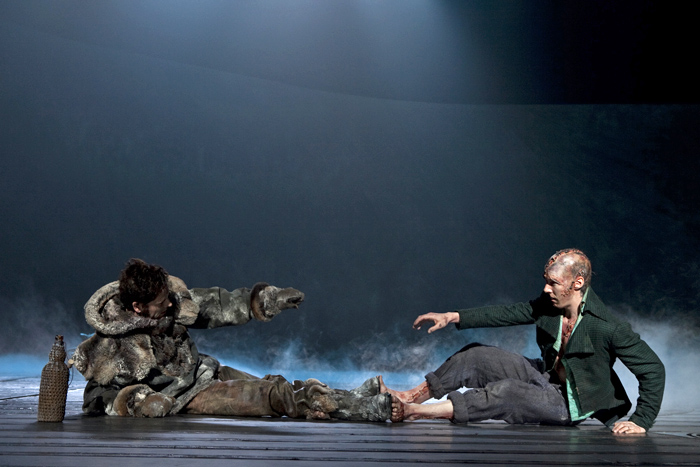 But removed from this scenario is the elegant self-teaching that takes place in the forest, off stage, for the Creature in Shelley’s original version. Rather than being educated by others, Shelley’s “monster” was never monstrous, it turns out after all, but has learned to speak and understand humanity all on his own, by reading the works of Milton, Plutarch, and Volney—yet another doubling of Victor’s own self-teaching at university via several outdated scientific texts. The elegance of the Creature’s speech in the novel derives from his digesting Paradise Lost, and even though the De Lacey-Creature relationship is engaging in the play, it places the Creature’s debt of learning into the hands of another, rather than on his independent capacities for self-development. In Shelley’s tale, the greatest fear was that a slave, a monster, a mass of human detritus could come alive at the hands of Victor—but the deepest terror was that he could become human all by himself.

2 Replies to “More Frankenstein(s): Cumberbatch, Miller, and the National Theatre”