Like many who have read Ann Radcliffe’s Romance of the Forest, I began the novel with the knowledge—one could even say the predisposition—that I would find in it the moments that Jane Austen parodies in Northanger Abbey. In Northanger, Catherine Morland finds a scrap of paper that she is certain will prove to be the last testament of General Tilney’s late wife—only to find that the memento is actually a laundry bill. This scene is one of many in which Austen communicates how Catherine’s excessive engagement with gothic novels has prejudiced her ability to interpret her immediate surroundings and experiences. I’ve read Northanger a handful of times and have always been a big fan, so I approached Radcliffe’s work anxiously, waiting for her heroine, Adeline, to find some damning piece of paper, which would fulfill my own expectations of gothic horror conventions.
Sure enough, a little over 100 pages in, Adeline stumbles upon the manuscript of a man who had years before been captured and killed in the abbey where she and her guardians, the La Mottes, are hiding from the French authorities. The “MS” horrifies yet captivates her, and for the next few chapters, she continually rushes back and forth between the room where she keeps the manuscript and the other rooms of the abbey, where she finds herself having to fight against the Marquis de Montalt’s sexual and marital advances. Her attention is torn between the written fragment of the past—much of which has been obscured by the erosion of ink on the page—and the immediate dangers of her present.
Did it fulfill my desires for cliché yet disturbing gothic goodness? Absolutely. But when I got to that part of the novel, I didn’t think of Northanger Abbey. Instead, a completely unexpected picture flashed through my mind:

This image is of Natalie Portman, playing the heroine Evey in the 2005 adaptation of Alan Moore and David Lloyd’s graphic novel V for Vendetta (1988-89). In both the film and the graphic novel, Evey—who has been captured by people she believes work for Adam Sutler’s repressive government—finds hidden in her jail cell a roll of toilet paper, on which Valerie, a previous captive of that very cell, has written an account of her own imprisonment and, eventually, death. (To keep things a little simpler, I’ll stick to the graphic novel from here forward.)
The comic, structurally like Radcliffe’s portrayal of Adeline reading the found manuscript, juxtaposes scenes of Evey reading the narrative and being tortured by faceless men trying to find the whereabouts of the terrorist, “V.” I should mention that the artistic medium of the graphic novel allows for this alternation to appear more fluid than in Romance of the Forest. Here’s one example, in which words from the toilet paper narrative overlay Evey’s torture scenes (Moore and Lloyd 159):

Radcliffe’s text approaches this slightly differently, in that—due to the restraints of her chosen medium of printed text—she offsets and marks the dead man’s narrative with multiple lines of asterisks. (Image below is from pg. 54 of the 1791 ed. of Vol 2.) 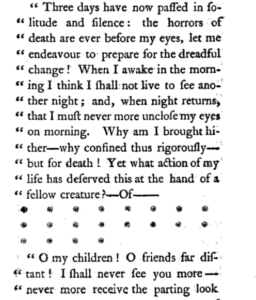 Formally, these two texts construct this scene in at least somewhat similar manners. However, the two texts resemble each other most in the way they use this nested narrative (as opposed to “frame narrative”) to the same end. Both accounts produce calls to action for each heroine to avenge, in some way, the now-dead writers. In this way, the authors—whose bodies are absent from the texts—exert agency on the greater story’s plot. Evey internalizes Valerie’s story, making her into a martyr whom she can use as a source of strength to withstand the government’s torture. And toward the end of Romance of the Forest, Adeline, who has (in spite of all her fainting) strived to bring about justice for all the men wrongly held captive in the novel, triumphantly, and in uncharacteristic boldness, exclaims that the MS’s author’s “last wish is fulfilled—the pitying heart you wished might trace your sufferings shall avenge them!” (Radcliffe 346).
Thus, Evey and Adeline are defined, in a way, by their interactions with Valerie’s and the mysterious dead man’s histories (I won’t spoil for you who the dead man is). They both find courage and strength in themselves—but they also receive a singular status. These women—over any others—appear destined to inherit the writers’ burdens, and it seems that only they can fulfill these dying wishes for justice.