We scholars of Romantic Gothic usually focus our attention on the Gothic novel, and indeed, the novel is what most people think of as Gothic literature. Gothic poetry has received surprisingly little critical attention. A search of the MLA International Bibliography for “gothic novel” yields 1052 results, for example; a search for “gothic poetry” yields 25.

I wrote about a few of the poems I mentioned below in the  Pride and Prejudice and Zombies Roundtable, as part of my discussion of Romantic zombies. That post made me realize how little has actually been written about Gothic poetry and its relationship to Romantic literature as a whole.
This neglect of Gothic poetry, and particularly eighteenth-century Gothic poetry, is perplexing for a few reasons. For one, what we think of as the “Gothic novel”–Radcliffe’s The Mysteries of Udolpho and Matthew Lewis’ The Monk are the two usual exemplars—are actually mashups of poetry and prose. The full title of Radcliffe’s novel is actually The Mysteries of Udolpho, a Romance; Interspersed with Some Pieces of Poetry, indicating the integral role of poetry in the novel. Emily, the novel’s heroine, frequently pauses in moments of intense feeling to jot down lyrical poems or simply recite or remember them, such as this recite such as the sonnet she recites in the memory of her recently deceased father.

Image source: https://archive.org/details/mysteriesudolph01radcgoog
Radcliffe is also known for her use of epigraphs, many of which are from contemporary poems, such as Collins’ “Ode to Fear”: 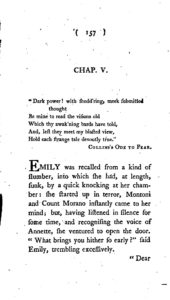 Image source: https://archive.org/stream/mysteriesudolph03radcgoog#page/n163/mode/2up
Radcliffe’s use of poems by other writers raises an interesting question: if non-Gothic poetry is used in a Gothic novel, does that make it Gothic? Are the epigraphs to be read as part of the text of the novel? Or as something else? What else?
Gothic poetry did not just appear in Gothic novels, of course; it had a life of its own, and a number of hugely popular and influential poems—especially ballads—were in circulation around the turn of the nineteenth century. The influence of Gottfried August Bürger’s “Lenore,” translated into English by William Taylor, is evident everyone, for example in poems like Sir Walter Scott’s “Glenfinlas; or Lord Ronald’s Coronach” and Matthew Lewis’ “The Gay Gold Ring,” both published in Lewis’ Tales of Wonder (1800). 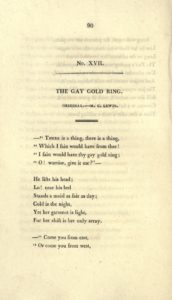 Image source: https://archive.org/stream/talesofwonder01lewirich#page/90/mode/2up
The best-known Gothic poem is probably Lewis’ “Alonzo the Brave and Fair Imogene,” which was first published in his novel The Monk (1796), but circulated as a standalone text as a broadside ballad and was reprinted numerous times in periodicals, including an issue of The Gentleman’s Magazine in 1796. 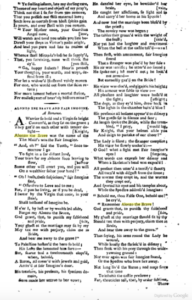 Image source: https://books.google.ca/books?id=oqwUAAAAQAAJ&lpg=PA773&ots=dyEz-mj0Kj&dq=%22alonzo%20the%20brave%22%20%22gentleman’s%20magazine%22&pg=PA525#v=onepage&q&f=false
One Gothic ballad that has received a great deal of critical attention is Samuel Taylor Coleridge’s “The Rime of the Ancyent Marinere,” although scholars tend to overlook its Gothic affinities, focusing instead on how it fits with Coleridge and Wordsworth’s project in Lyrical Ballads; in the 1798 edition of that collection, “The Rime” was the first poem in the book.
Reading that poem alongside other Gothic ballads, though, highlights the connections between Gothic and “mainstream” Romanticism, which are too often thought of as separate entities. Revealing the supernatural in the everyday is, of course, one of the duo’s professed goals in Lyrical Ballads, an idea that permeates all other Gothic literature, which, like Romanticism in general, is essentially concerned with ontological uncertainty and the nature of reality.

One Reply to “Gothic Poetry”