I grew up in Toronto, but having lived on the west coast for the last five years, for me, one of the highlights of this year’s Canadian Society for Eighteenth-Century Studies (CSECS-SCEDHS) conference was the chance to see snow! The conference was held in Kingston, Ontario, from October 26–30, 2016, and was sponsored by Qu 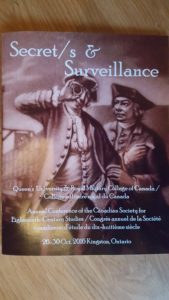 een’s University and the Royal Military College of Canada. I watched the weather change from sunny and clear to grey and snowy on the train from Toronto to Kingston, and the stormy skies in Kingston were a fitting backdrop for the conference’s theme of Secret/s & Surveillance.

Like last year’s conference in Vancouver, though, the atmosphere inside the hotel was convivial rather than foreboding, marked by collegiality rather than paranoia. CSECS is friendly to graduate students, offering a welcoming place to share our work as well as generous travel bursaries. It has a national graduate representative—Catherine Nygren—and a local one––Katie Hunt. They held a lunch for grad students that promised “Free Lunch and Wise Conversation,” according to the program, with a panel of deans, fellows, and librarians. They also hosted a fun, more informal, grad student get-together at a local pub.
As a Romanticist, I felt a little out of place: most of the papers seemed to focus on the early part of the century, although there was a panel on Romantic Voices and two on Austen: one on Emma, and one with a general Austen theme. As is typical of good conferences, there were more enticing papers than there was time to hear them all, but the highlights for me were Betty Schellenberg’s “Hidden Worlds of Reading: The Parallel Literary Universe of the Eighteenth-Century Personal Miscellany,” Katherine Binhammer’s “The Character of Debt,” Tom Keymer’s “Jane Austen’s Teenage Writings: Amusement, Effusion, Nonsense,” and David Richter’s “Becoming Jane, Miss Austen Regrets, and the Cultural Mythology of the Biopic.”
Next year’s conference CFP has not yet been released, but it will be held in Toronto, Ontario, from October 18–22. And who knows? It might even snow.