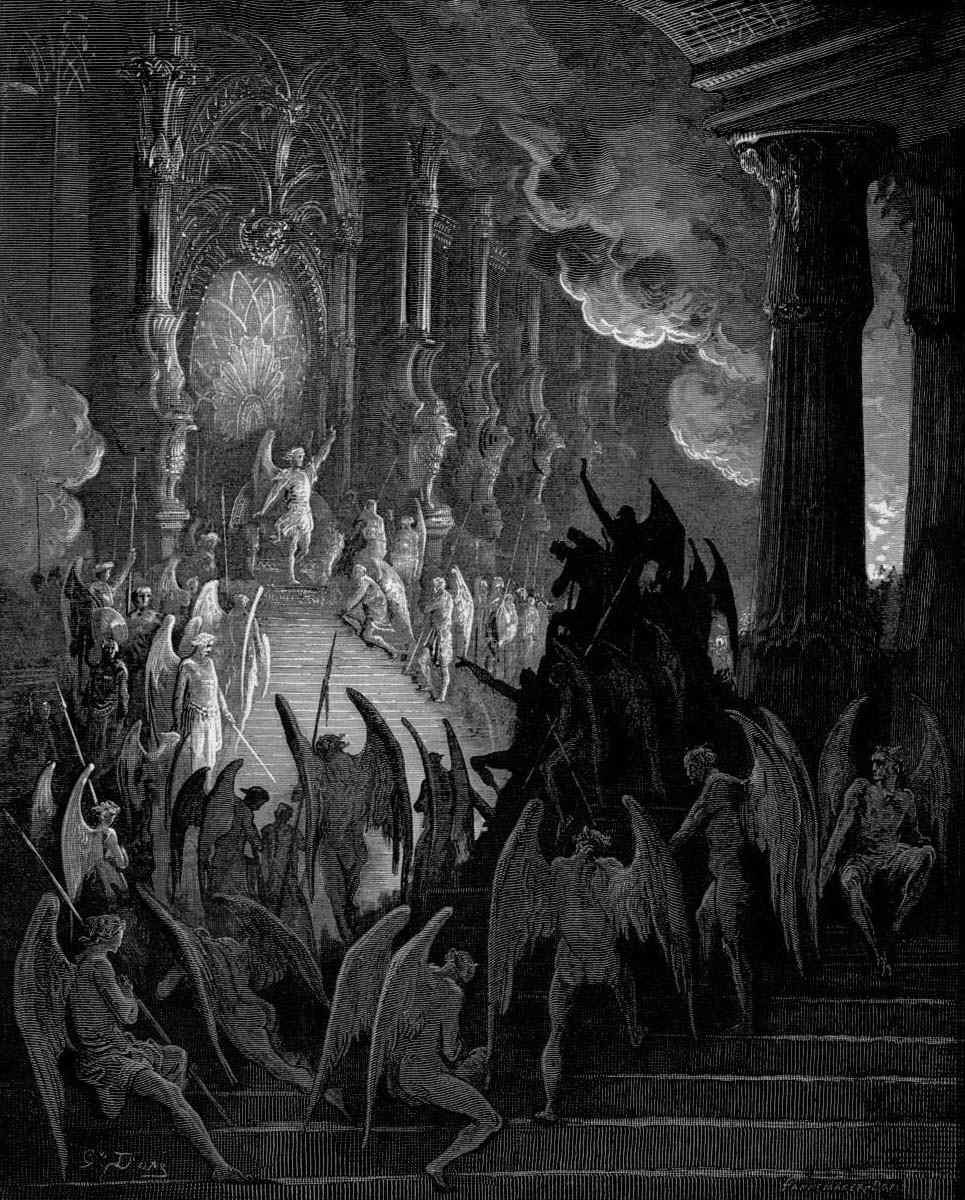 Recently, I have been working my way through C. S. Lewis’ The Screwtape Letters (1942). The text unfolds as a series of correspondence written in Hell from a ranking demon, Screwtape, to his aspiring young nephew, Wormwood, offering advice on how to best ensure the damnation of a man known only as “the Patient.” In view of Lewis’ legacy as a Christian apologist, the Letters’ rhetorical strategy appears glaringly obvious: by playing the devil Lewis hoped to inculcate a stronger sense of faith in his readership. Yet, what is striking about the Letters is how vociferously anti-Romantic the text is in its handling of theology, eschatology, and those weighty matters of doubt and faith. In one letter, for instance, Screwtape holds Coleridge up as a model of the kind of “superficial” worship of the divine that Wormwood should aim to cultivate in his patient in order to secure his spiritual downfall.[1]
END_OF_DOCUMENT_TOKEN_TO_BE_REPLACED

In the spirit of Rousseau, I must confess. I confess that I have always held what is probably a peculiar interest in a rather particular narrative genre. This genre might best be described (perhaps also in the spirit of Rousseau) as “scholarly autobiography.” It is not quite the dissertation, or thesis, itself. Many of us, I’m sure, are already all too familiar with that genre’s idiosyncrasies, conventions, and requirements. In any case, the dissertation properly belongs in the realm of scholarship. Yet, neither is it really the conception, or account, that we all have in our minds of where we see our scholarship positioning us in relation to ongoing conversations with colleagues, or within our field more broadly. Nor is it even how we imagine our work will evolve in the future. Nevertheless, this genre pertains precisely to the dissertation, itself. Moreover, it is a genre that all of us, as graduate students, are deeply invested in. I speak, in particular, of the stories surrounding our dissertations. Often these are autobiographical, but many times they also take on the aspects of history, fiction, even myth: from whence our interests came, how they shaped our decisions to become scholars, and how they continue to guide us along what may well be for many of us our own personal “Quest Romance.”
END_OF_DOCUMENT_TOKEN_TO_BE_REPLACED

What would Lord Byron say, I wonder. How might that quintessentially Romantic “man of affairs,” as Jerome McGann once delighted in punning,[1] respond to our current state of affairs? What would he say of our endlessly streaming 24-hour news cycle, or to our social media? We can never know, of course. But as a politics and news junkie, as well as a Romanticist, I love to speculate.
END_OF_DOCUMENT_TOKEN_TO_BE_REPLACED

At the climax of the thunderstorm in the alps in  Childe Harold III, Byron/Harold flashes some virtuosic self-aggrandizement:

Could I embody and unbosom now
That which is most within me,—could I wreak
My thoughts upon expression, and thus throw
Soul, heart, mind, passions, feelings, strong or weak,
All that I would have sought, and all I seek,
Bear, know, feel, and yet breathe—into one word,
And that one word were Lightning, I would speak;
But as it is, I live and die unheard,
With a most voiceless thought, sheathing it as a sword. (st. 97)

Byronism was always poised on the brink of self-parody, even if it waited until Don Juan to tumble gleefully over the edge. Here the verse inflates a Wordsworthian sense of psychic geography to alpine magnitude. Yet at its climax, the stanza dismisses the expressive power of its own vehicle—language. Wordsworth, predictably, was not amused by Childe Harold. He held the younger poet’s newfound reverence for nature an affectation, “assumed rather than natural,” and accused Byron of “poaching on my Manor” (3:394). The remark performs a fascinating inversion since, as Tilar Mazzeo notes, “the professional Wordsworth casts himself as the lord of the literary estate and charges the aristocratic Byron with crass appropriations that are figuratively beyond the pale” (144). Beyond the pale is right: poaching had been codified a hanging offense since the Black Act of 1723, which became both model and synecdoche for a “golden and sanguine” legal code that deemed nearly every offense against property a capital crime.
Byron tried to exculpate himself by claiming that Percy Shelley had “dosed him with Wordsworth physic even to nausea” (Medwin 237). In this spirit, let us consider Canto III’s thunderstorm episode a Wordsworth-induced fever that ends in purgation. Byron/Harold begins this “classic piece of rodomontade” (Hodgson 379) by wishing he could “embody” and “unbosom” what lies within him. Even in the prefixes, these verbs do the work of synthesizing and then negating—the former a making and reifying, the latter an unloading, a jettisoning. These nearly contradictory transformations operate on “That which is most within me,” which is then detailed in a parenthetical inventory that ends up spilling out over five lines. This messy catalogue of the interior—thoughts, feelings, desires plus their objects—might seem random and spontaneous, but it lands squarely and deftly within the meter, such that it can be gathered “into one word.”
END_OF_DOCUMENT_TOKEN_TO_BE_REPLACED

I’ll seize any chance I can get to talk about Lord Byron’s fan letters – and with the somewhat flimsy excuse of the 224th anniversary of the publication of Cantos I &II of Childe Harold’s Pilgrimage just around the corner (March 20, to be exact), now seems like a perfect time. Lord Byron received fan letters? Of course he did! 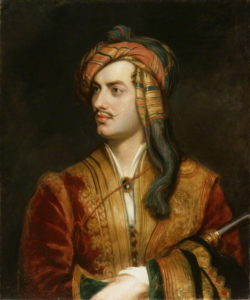 (1813 portrait of Byron in Albanian dress, by John Phillips)

END_OF_DOCUMENT_TOKEN_TO_BE_REPLACED

We bring you the Shelley, Keats, and Byron dance party.

I was very excited to hear about Margaret Doody’s new book, Jane Austen’s Names: Riddles, Persons, Places (University of Chicago Press, April 2015). In this text, Doody traces the etymological contexts for the nomenclature of each of Austen’s characters, while exposing curious patterns of naming throughout her corpus. Who knew that Austen’s Marys were uniformly negative, or that, with the name “Fitzwilliam,” Mr Darcy naturally followed as the inheritor of William Collins’s suit for Elizabeth’s hand?


When I peeked into the book itself, I was impressed with the etymological research, and I was inspired to think about how the names could be explained further with historical correlatives. The Romantic-era histories behind the names give the characters even more flair, while showing Austen’s awareness of some of the most fraught and intriguing  elements of English public life — including espionage.   END_OF_DOCUMENT_TOKEN_TO_BE_REPLACED

One of the great advantages we have as scholars is the opportunity to form communities beyond our institutions — not just at annual conferences in remote locales, but also in ongoing conversations on the web. These online communities are fora for scholarly dialogue and informal queries, requests for crowdfunding special projects and historical sites, and repositories of archival material. Here’s a brief roundup of selected sites, listservs, and communities available to Romanticists (and if you know of more, please get in touch!).
Academic listservs:
(1) NASSR List — the list of the North American Society for the Study of Romanticism (subscription required). The list is frequented by many major scholars in the field, but also graduate students and junior faculty; this is a particularly excellent resource for answers to obscure and arcane historical questions, and for links to major awards and opportunities in the field. END_OF_DOCUMENT_TOKEN_TO_BE_REPLACED

Last night, I performed five of Lord Byron and Isaac Nathan’s collaborative work of music and poetry, the Hebrew Melodies (1815), with the lovely and talented soprano Catherine Hancock at a private home in New York City. This was the New York premiere of Byron’s songs: there’s no record of the Hebrew Melodies being performed in American nineteenth-century periodicals, and although the musical settings were popular in the early decades of the nineteenth-century, the score was out of print from the 1850s until 1988, when Paul Douglass and Frederick Burwick produced a scholarly edition to coincide with the bicentennial of Byron’s birth. So, though we were working with music that was exactly 200 years old, the material was very new for our listeners. Theodor Adorno once said that the second-generation Romantics were “the locum tenentes of nonexistant great English composers.” But what was the music that was being written and played during English Romanticism? Our concert sought an answer to this question. END_OF_DOCUMENT_TOKEN_TO_BE_REPLACED


I know the beginning of the semester (or really any time during the semester) is not the best time for a book recommendation. But, I think you’ll forgive me because this is a fun one and packed with your favorite “literary characters.” Andrew McConnell Stott’s The Poet and the Vampyre was released late in 2014 and is a biographical amble through the events great and small surrounding the fateful weekend in Diodati that produced the monsters we have come to love. Yet, it also self-consciously dances around that stormy night—one that we can all agree fascinates scholars but has been written about to (un)death—in favor of an in-depth look at the relationships amongst these young poets and poetesses that brought them together and split them apart, primarily focused on Byron’s influence (and curse) upon his young doctor, John Polidori. For years, I have been an apologist for Polidori and his novella, The Vampyre, both of which often get shoved to the side for being important but not necessary or enjoyable. Here is finally an attempt to bring Polidori to life, not just as the spiteful tag-along of more successful poets but as the sympathetic victim of other people’s celebrity. END_OF_DOCUMENT_TOKEN_TO_BE_REPLACED