The boys of the newly formed Dead Poets’ Society are holding one of their weekly meetings (except Knox Overstreet, who’s at a party trying to talk to the girl of his dreams) when there’s a sound—the likes of which strikes terror into the hearts of teenage boys: a girl’s laughter.  Charlie leads them in, offers them cigarettes, while the rest of the group stares on in silence, not sure what to say, what to think, or even whether or not they’re allowed to speak.  The boys eventually try to talk, though it’s Charlie who eventually succeeds in properly “wooing” the girls by of course reciting poetry: first a poem by Elizabeth Barret Browning, and then a second one by George Gordon, Lord Byron. END_OF_DOCUMENT_TOKEN_TO_BE_REPLACED

There’s a recurring question that springs to mind whenever I sit in the Starbucks in the Barnes & Noble in my little East Texas town and stare up at the mural of authors who all seem to have transcended time and space to have coffee alongside the hipsters: who put Oscar Wilde next to George Eliot, Rudyard Kipling, and Trollope?  Seriously, is it any wonder that the man looks so bored?  Wilde shouldn’t be surrounded by those Victorian fogies, he should be sipping gin with Truman Capote, Christopher Hitchens, Walt Whitman, and the one man who would almost certainly guarantee a good time, and who also happens to be the focus of this 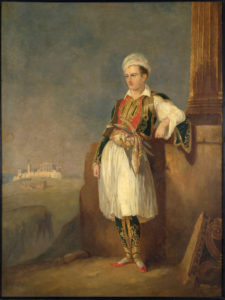 essay, George Gordon, Lord Byron.  The reason for such inclusion is simple: Byron could be an absolutely trenchant satirist when he wanted to be.  Byron, like Wilde, Capote or Hitchens, could bring out his own breed of sharp wit whenever someone at a dinner party decided to be cleverer than him, only to  be left decimated in a single sentence by his superior rhetorical ability.  I know this is a platitude, but sometimes I really wish I could have been a fly on the wall whenever Byron let loose one of those glorious aphorisms that sealed his entrance into the hall of “Truly Spectacular One Liners,” if only to see and understand how it was that Rodney Dangerfield sealed his membership before the poet.  (Then again, when you’ve starred in Caddyshack, your “Immortality card” is pretty much secure, unless you’re that blond kid who was the protagonist, and does anybody have any clue what happened to that guy?) END_OF_DOCUMENT_TOKEN_TO_BE_REPLACED